Mooring lines production, how it’s made…

Understanding mooring lines starts with knowing how they are being produced. Various materials and constructions are available, and it is important to choose the right one to protect your superyacht.

Producing high quality mooring lines starts with the right material in both cover and core. More Marine supplies Gleistein ropes and the M-ropes range  for superyachts. This gives us the option on supplying the right product against the right price.

Both Gleistein and M-ropes are using the best high-tenacity polyester yarns in order to ensure a good abrasion resistance and high breaking load on our mooring lines. The right construction and production is needed for good stretch characteristics.

The polyester or dyneema core is braided as a 12-strand rope which is the first part of the production. We prefer using white core since this makes it easier to identify damages in the cover since the contrast of the white core is visible against the black cover.
The 12-strand core is being braided in 6 pairs of 2 strands.
The core needs to be flexible and softly braided to give as much stretch as possible.

The 12-strand polyester core of the dockline is being spooled on big spools to be ready for braiding the cover around it.

The cover is braided on a similar way as the core. The main difference is the number of spools, and thus the number of stands. The core is being pulled through the center of the machine making it a double braided rope.

12-strand ropes are all being produced in a similar way, except they don’t have a cover around it.
In case of 3-strand ropes, every strand is being twisted, which creates the 3-stranded rope. Also in here the amount of twist is key to the characteristics of the rope. 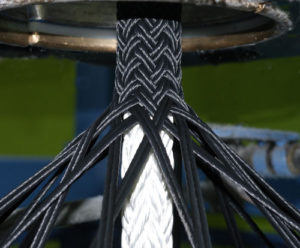 Twisting of the yarns

Every mooring line starts with a small flat yarn. These yarns are high-tenacity polyester in case of our polyester ropes. The flat yarn is twisted on special twisting machines.
This process is really important for the performance of the rope. More twist means more abrasion resistance, but also a stiffer rope. Generally the yarns in the cover are more twisted, and the core yarns are less twisted since they need good stretch and flexibility.
The yarns can be twisted clockwise or anti-clockwise, we call this Z and S twist. A close look at the yarns in the cover of the rope clearly show these are combined in the cover. For a good abrasion resistance it is very important the small yarns are aligned in the axial direction of the rope, creating less friction when the rope runs on an edge, fairlead or winch.

For thicker strands, several yarns are twisted together until the desired thickness has been achieved.
The yarns are now spooled on special spools for the braiding machine. The double braided mooring lines we supply generally have 12 strand in the core, so 12 spools are needed, and 32 strand in the cover, needing 32 spools on the machine.

We happily accept these payment methods

We use cookies to ensure that we give you the best experience on our website. If you continue to use this site we will assume that you are happy with it.OkNo thanks
Revoke cookies